The first thing a physician usually says after diagnosing a patient with diabetes is “No more sugar!” Diabetics must continually be on the lookout for obvious sugars and hidden sugars in the foods they eat in an effort to stay healthy and well. However, many individuals simply cannot go without that sweetness in their morning cup of coffee and use a sugar substitute.

While we all know that none of these substitutes are made out of sugar, many people don’t know what they are actually made out of, and don’t realize the vast differences between sugar substitutes. Most are frighteningly dangerous to our health and have devastating effects on our bodies.

Aspartame (NutraSweet, Equal, AminoSweet) – Numerous comprehensive studies have shown that aspartame is a major cause of more than 90 serious health problems including cancer, headaches, fibromyalgia, leukemia, seizures, and epilepsy. Aspartame has been found to cause significant brain and liver damage by reducing the body’s main antioxidant, glutathione.

Sucralose (Splenda) – A study on sucralose has proven that it actually causes spikes in blood sugar, which has a huge impact on diabetics who are using sucralose instead of sugar in an effort to improve their health. Sucralose also negatively affects the liver, kidneys, and normal digestive system function.

Saccharin (Sweet’n Low) – Only recently, has the FDA lifted its requirement for products containing saccharin to list it as a potential carcinogenic ingredient. Saccharin has been most frequently linked to the development of bladder cancer in animal testing subjects.

Even though artificial sweeteners don’t contain calories, they have been associated with obesity and diabetes. Researchers believe this may be because the sweeteners increase the “reward value” impact that the foods we eat have on our brains and may cause us to overeat subconsciously. Some researchers also surmise that the huge amount of processed “reward value” foods that are so readily available are the true cause of the obesity epidemic in the U.S.

A natural sweetener we discovered several months ago has become the favorite at our house. It’s called ZSweet and it’s quickly emerging as the leading safe sugar substitute. The ingredients are erythritol (a naturally occurring sweetener) and S. rebaudiana Leaf Extract (an FDA approved stevia extract). With only 6% the calorie count of sugar, erythritol has 70% of the sweetness.

Erythritol passes nearly unchanged through our digestive system without any of the effects of excess sugar, and has not been found to cause any of the digestive issues that have been associated with other sugar alcohols and sugar substitutes.

In a recent study, when healthy people were given erythritol, there was no change in blood sugar or insulin levels. There was also no effect on triglyceride or cholesterol levels.

In a Netherlands research study, erythritol reduced the glycemic impact of foods and beverages and reduced the free-radical damage caused by high blood sugar. Researchers stated that this revelation is expected to reduce the initiation and progression of painful and life-threatening complications associated with diabetes. 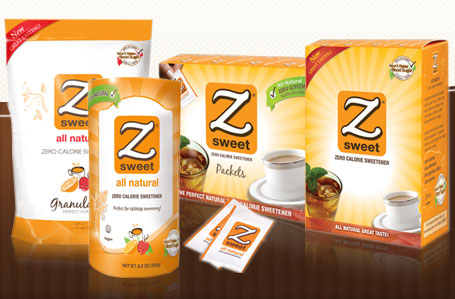 For individuals with diabetes, erythritol appears to be an excellent alternative to sugar. Research has overwhelmingly revealed the harmful and frightening effects of nearly every other artificial sweetener and sugar substitute. ZSweet seems to have not only a lack of risks, but a wealth of benefits when used to replace sugar.

We were amazed at how much it tastes like sugar and everyone we’ve shared it with has had the same response.

We have arranged for our subscribers to receive free samples of ZSweet. If you would like some, please click here… Otherwise…

Gunnars, K. 2013. Erythritol-Like sugar but without the calories. Too good to be true? Retrieved from http://authoritynutrition.com/erythritol/

Law, B. 2009. New Sweetener not so good for your diet. Retrieved from http://www.nbcnews.com/id/30195885/ns/health-diet_and_nutrition/t/new-sweetener-not-so-sweet-your-diet/#.U1gRL_ldUo4